The XPOD from ePuffer is a trio of disposable vapes sold in one pack. Each XPOD purchase comes with color-coded devices for the three flavors: mango, tobacco, and menthol. The XPOD is a small pod-like device with a 280 mAh non-rechargeable battery, 1.2 mL of 18 mg/mL nic salt ejuice, and a 2.7-ohm resistance to the coil. 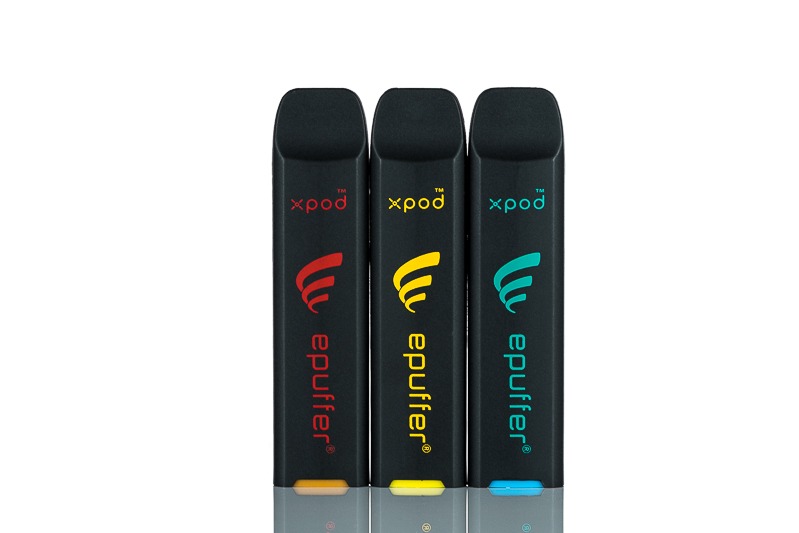 The XPOD looks similar to traditional pod vapes but its smaller and lighter than most. One XPOD weighs about 12 grams, which puts it right around the weight of the JUUL. The body is a thin hard-plastic with a matte-black finish, and the different flavor XPODs are color-coded.

Using the mouthpiece is a delight! It’s ergonomic and comfortable to draw on. It reminds me of the defunct Cync. Like the smallest Cyncy battery, the XPOD can be held in the mouth just by clinching down on the mouthpiece. The mouthpiece isn’t a soft-touch rubber like what was used in the Cync, but the XPOD is light enough that going hands-free is second nature when using it.

As stated, the XPOD is disposable. It’s actually not a true pod though. I took mine apart and it’s more along the lines of a cartomizer housed inside a device that looks like a pod vape. Maybe ePuffer considers the whole device a pod? Either way, the device has the form factor that’s popular right now.

The performance of the XPod is surprisingly good for a disposable vape. It’s meant for low-vapor output via an MTL draw, but the vapor is satisfying enough to get you out of a pinch if need be. It produces warm vapor along with a punchy throat hit and intense flavor. Whether I like the flavors or not is separate from the fact that it’s intense!

The XPOD is squarely an MTL vape. It has a tight draw, yet it vapes easily with a light drag. Also, there are no awkward crackling and popping sounds. Not a single drop of leakage and there have been no major issues with the coil’s performance.

Having said that, there’s no way I could get by with this as my main device. If I was on a short vacation or road trip though, I’d be fine with it. Normally, disposable vapes are not known for being strong performers, but the XPOD is one of the better ones I’ve tried (in terms of performance). From the ePuffer site, it states this device is good for 300 puffs. That’s not something I can verify, but I can say that the flavors last longer than the battery. Now, about those flavors… 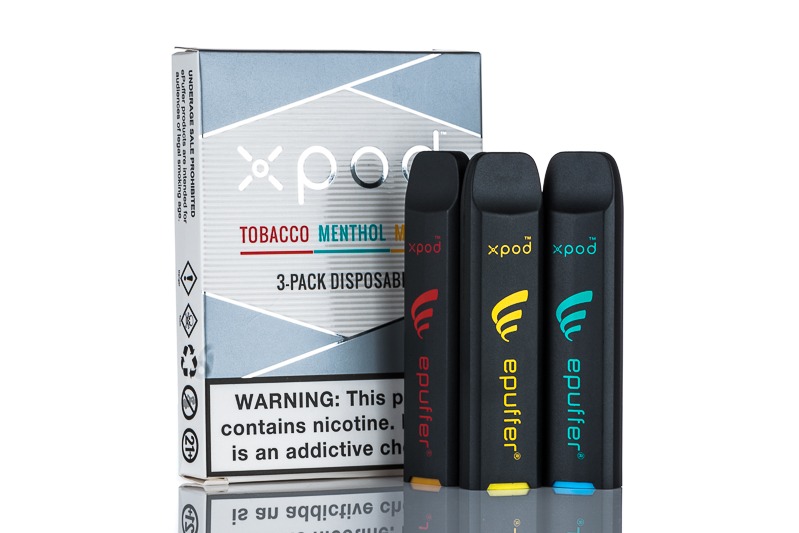 Menthol (blue): Without a shadow of a doubt, this is my favorite of the three. It’s a very flavorful menthol, with a bit of a sweetness — almost tasting as if it has eucalyptus in the background. It’s not super cold on the throat; more like the cooling of a peppermint — but it’s not exactly a mint-tasting. All in all, it’s really good with great depth of flavor for a seemingly simple juice. And this is coming from someone that typically hates menthol!

Tobacco (red): The tobacco is one of the strangest and strongest tasting flavors I’ve ever had. It tastes like tobacco absolute is in the mix — an ingredient used in tobacco ejuice way back in the day. I don’t know for certain that this uses tobacco absolute, but it has the telltale signs of it: the unmistakable taste of burnt grass and perfume or soap. Opening the sealed packs the XPods come in, I was hit with what smelled like a burnt hit. And that’s before I ever took a drag!

Mango (yellow): The mango flavor is odd. It tastes like it’s mixed with some of their tobacco flavor and a touch of the menthol. It’s also not a sweet mango. It’s earthy, unripe tasting, and it has that same harsh note of burnt grass. It doesn’t taste very pleasant to me. But if I had to choose between this and the tobacco flavor, I’d take this in a heartbeat!

– Mango and tobacco flavors are unpleasant

All things considered, I think this the XPOD is a good disposable, but with only one flavor I like. I was sent a few packs of these, so I can say for sure that the flavors I tasted are as they’re meant to be. Who knows? Maybe the mango and tobacco will have fans.

I do really like the menthol and I now keep one in the car as a just-in-case vape! I would like to see ePuffer sell the flavors individually. As of now, I can’t recommend this device due to the tobacco and mango flavors being so jarring. But if they decide to come out with a three pack of just the menthol, I would easily recommend that for someone looking for a disposable.