The Kylin RTA was one of Vandy Vape’s most popular tanks to date. Based on its success, they released the Kylin Mini, which was also a big hit. Today we are looking at the Kylin V2, the latest update in the Kylin line-up. It features a few updates to the original, while maintaining a familiar design and aesthetic.

The tank features the same post-less “halfpipe-style” deck from the V1, but with an updated airflow design. It also utilizes a new top-filling system that snaps open to reveal a big fill port. The Kylin series is best known for its great flavor, so let’s find out whether or not this has been improved on the version 2.

The device was sent to us by MyVPro for the purpose of this review.

The Kylin V2 is 24 mm in diameter and holds 3 mL with the straight glass tube, or 5 mL with the 26 mm extension. It holds almost as much as the V1 with the extended glass, while maintaining a low-profile design. It also allows your coils to sit a little bit closer to your mouthpiece, which is another big plus.

Overall it feels well machined, the threading is very smooth. I didn’t have any issues taking the tank apart for cleaning and building. The Kylin V2 includes a Goon-style resin drip tip that’s compatible with my Half Moon drip tips, and has a similar look to it. It comes with a wider black mouthpiece and a 510 drip tip adapter.

The Kylin now has a sliding top-fill mechanism. It takes a bit of force to get it fully open, but it makes a nice snapping sound when you do. It doesn’t seem to shut with the same authority. Be sure to close it all the way, without leaving a lip on the edge. The tank has a small engraved dot on the top to indicate where it opens, but I found it very hard to locate even in good lighting, which was a bummer. On the Vandy Vape website, the final production model is pictured with a more visible arrow on top instead.

I like the matte black finish on the one that I received, and some of the other color options look nice too. I’m not in love with the overall aesthetics, but it has a gear-style textured design that reminds me of the old Twisted Messes RDA, which is cool. I can’t complain, it has a simplistic design that I do appreciate. 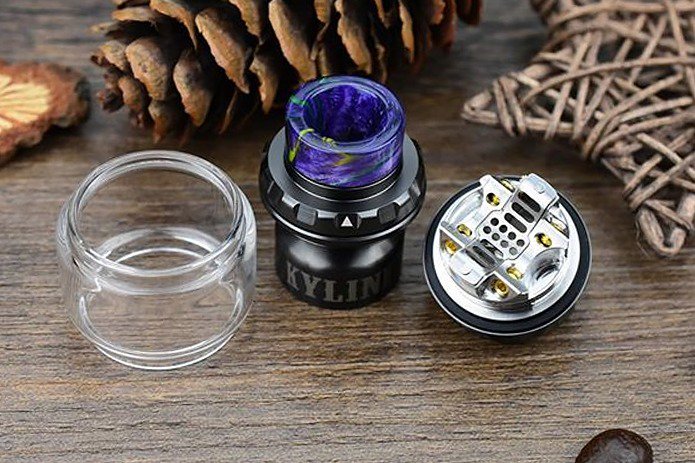 Vandy Vape is sticking with a cambered-style deck. It has a U-shape, similar to a skateboard ramp. The design is postless, and accommodates both single and dual coil configurations nicely, with the coils sitting right in the center. The deck has four strong hex screws on each corner of the deck, just like the new Phobia V2 RDA. They both have a similar postless build deck that is good for trapping your leads.

The wicking slots appear to be rather slim. I’m guessing the wicking for this device is going to be very particular in order to get the right performance. The tank comes with some beefy fused claptons, so I’ll need just the right amount of cotton to go through them, tapering them down into the wick ports. 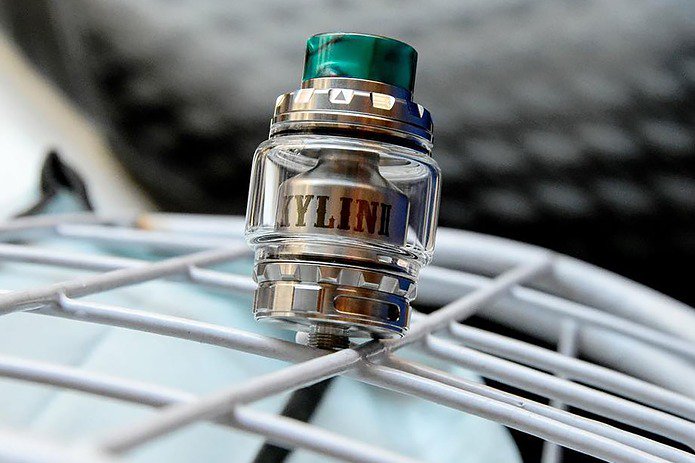 The coil cutting tool is to key for quick coil installation. It actually cut a few minutes off the coil-building process. The tool has a sticker on it to indicate the perfect length for this particular deck. I took the coils included with the tank, and snipped them accordingly. It’s a brilliant idea that Vandy Vape now includes this tool with all their devices that have postless decks, to make them more accessible. Then I just placed the coils in the slots and tightened up the hex screws while gently holding them in place. The grub screws did a great job trapping the wire, and the overall process was easy and quick.

Wicking the device did take some trial and error. You’ll want to use a good amount of cotton to fill up the coils, but you have to cut them at an angle before tucking them into the slots. I did experience some dry hits when I first started using the Kylin V2, but after some practice, it was wicking without any problems. Fluffing your cotton helps, but more importantly, just don’t overstuff those wicking ports. Also, if you don’t use enough cotton, you’ll get some spitback and possible leakage from the bottom airflow slots. 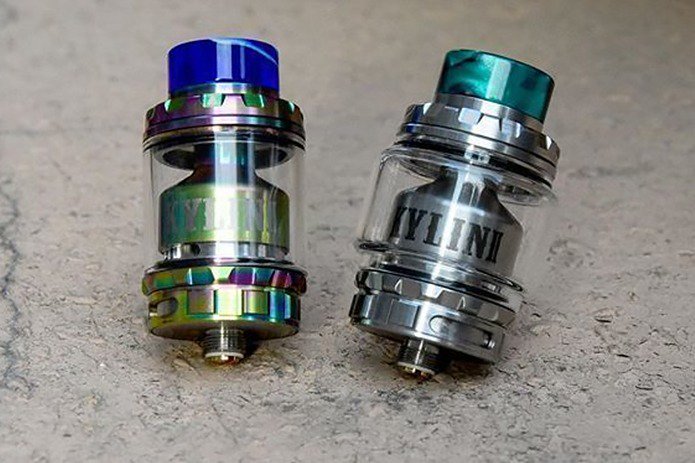 Initially I was having some issues with dry hits, and I was not happy. It turns out it was the e-juice I was using. It had a ton of sweetener in it, and wasn’t doing very well at 60 watts with 0.15 ohm dual coils. I had better luck at 50 watts, but I wasn’t really able to chain vape it with the airflow wide open. I decided to switch it out for one with less sweetener, and with a similar PG/VG ratio. It started wicking much better, and I was able to chain vape it at 60 watts, no problem — even with the airflow maxed out.

The tank seems to be running through e-juice incredibly fast using the stock coils. I can almost count on my fingers the amount of puffs I can take until it’s time to fill. The Kylin V2 doesn’t wick down to the last drop either, it starts to give you dry hits if you don’t fill it up in time, which comes faster than you think. Just keep an eye on it. Make sure to close the airflow holes when filling and never leave the top open, or it can start to leak from the bottom.

Once I got the wicking just right, the performance was on point. I am getting a very saturated vape from this tank — it’s juicy! The vapor is warm, condensed and flavorful, especially using a dual-coil setup. It still performed well in single coil mode, but puts out a lot more flavor in a dual coil configuration. The tank can accommodate coils with a 3.5 mm ID, I wouldn’t go much bigger despite its large chimney.

I played around a bit with the coil placement but it didn’t have a huge impact on the overall performance. I liked having the dual coils right the middle, above the airflow and as close as possible without touching. The clouds it produced were dense and thick, the kind that slowly drift to the floor. It chucks for sure. I would classify this as more of a flavor chasing tank, but it does great with clouds too. 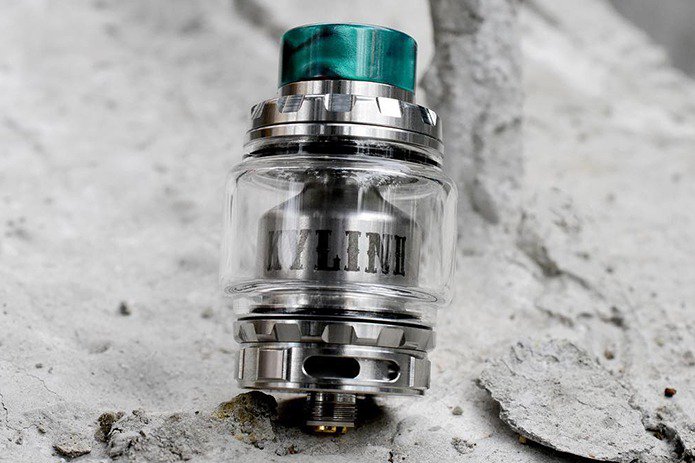 The airflow on the Kylin V2 is incredibly smooth. It provides enough airflow for clouds while maintaining very saturated flavor. It still has a bit of restrictiveness, even at its widest setting, which I like. The deck has a bevelled insert that directs the airflow up through the center of the deck, right beneath your coils. It looks like it’s made out of ceramic, but there is no official word from Vandy Vape on the material used.

I think the slight restriction is caused by the deck, because it has narrow airflow slots, instead of the four big holes on the original. This also contributes to the smoothness of the draw, which is noticeable. Closing off the airflow halfway gives you a smooth restrictive lung hit, with warm condensed flavor. The Kylin V2 puts out more than enough airflow for the mid to high wattage output range.

With all things considered, the Kylin V2 is a solid RTA. It’s well constructed and comes with all the extra bells and whistles like a coil-cutting tool, a cool resin drip tip and some nice fused Claptons. I wouldn’t recommend it to a beginner vaper because of the wicking situation, but I would to the more experienced builders and flavor chasers. You might not nail it down right away, but when you do, it’s flavor for days!

If you already own the original Kylin RTA, this may just be the upgrade you’ve been waiting for. The V2 has a more modern look and comes with improved performance. It’s a nice overall value, especially considering the price. If you’re looking for a low-profile rebuildable tank with awesome flavor, and you have some experience with wicking RTAs, then you are going to appreciate this tank. What do you think about the Vandy Vape Kylin V2 RTA? Share your thoughts in the comment section below.