Dick Durbin thinks he’s got a winning issue, and he’s planning on taking full advantage of it to pick up a few votes from fearful parents. Can you guess what it is?

The Illinois Democrat has it all figured out. Vaping, he says, is a Big Tobacco plot to addict a new generation to nicotine — and e-liquid flavors are the tip of the tobacco industry spear. This might be funny if he weren’t such a powerful politician.

Durbin is the Minority Whip, the second-highest ranking position among Democratic members. And the Minority Leader, Chuck Schumer, is possibly even worse on the vaping issue than Durbin. That means if the Democrats regain a majority in the Senate this fall, these two will lead a legal lynch mob against the independent vaping industry. 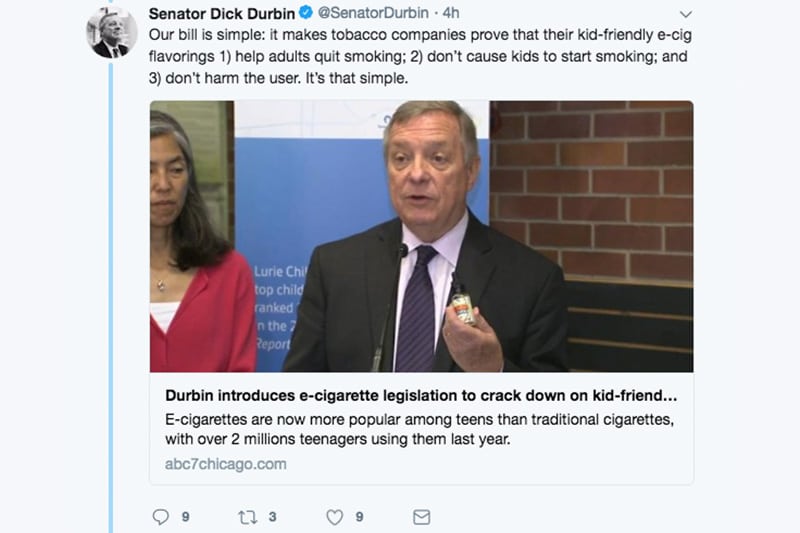 But forget the elections. Durbin is a menace right now. He’s already applying maximum pressure on the FDA to restrict or ban e-liquid flavors. And the senator who made our worst anti-vaping politicians list is about to introduce a bill, with Republican support — the co-sponsor is Lisa Murkowski of Alaska — that would completely wipe out all existing vapor products.

“We have made great progress in convincing kids not to start smoking cigarettes. They know that cigarettes kill and that, nowadays, it’s hard to find someplace where smoking cigarettes is even allowed,” Durbin said in a statement Monday. “But, I am convinced that e-cigarettes represent the ‘re-invention of smoking,’ cooked up by Big Tobacco to hook a new generation.”

The senator held a press conference in Chicago to announce his bill, which he said will be introduced this week. The bill will require e-liquid manufacturers to prove within a year that their “child-friendly” flavors work as cessation products — a standard he knows no vapor company can meet. What are child-friendly flavors anyway? 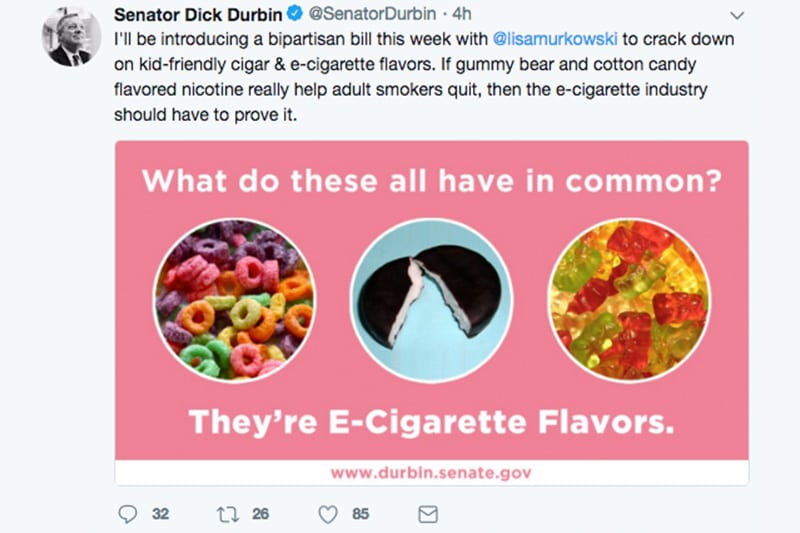 Durbin is calling his bill the SAFE Kids Act. Of course he is. The acronym is not explained anywhere that I’ve seen, but I think it’s safe to guess it stands for Stop All Flavored E-liquid, or something equally embarrassing. Or at least it would be embarrassing for anyone who researched the issue before getting up in public and pretending to know something about it.

“When the people who make these products, like JUUL, insist this is just for adults to quit smoking tobacco products– bologna, you wouldn’t be pedaling these flavors to adults,” Sen. Durbin told the press conference.

Durbin, who gets his information on vaping products from organizations like the Campaign for Tobacco-Free Kids, sounds as foolish as anyone who relentlessly opines on a subject they don’t know. The problem is that he’s a U.S. Senator, and that makes him a fool we have to take seriously.

Learn What Vaping is and How to Inhale Properly

The Potential Side Effects from Vaping

JUUL Wants to Promote Itself as a Quit-Smoking Product

Vaping 101: How to pick the perfect PG/VG ratio for vaping the tastiest e-liquids