The Delta and Reload kit is a collaboration between TVL and Revenant Vape and is manufactured by Vaporesso. The Reload is a 24 mm single-coil or mesh RDA that is designed mainly for squonking. The Delta is a single 20700/21700 (or 18650 with adapter) regulated squonk mod that houses Vaporesso’s OMNI 4.0 board and fires up to 100 watts. It also features a very innovative squonk mechanism, using a button instead of a soft bottle, and a practical push-to-fill (PTF) design that allows you to fill the squonk bottle without removing it from the device.

TVL are best known for their solid mech mods, while Revenant has a regulated mod catalogue, with the Cartel 160 being their most popular one up to now – a mod that was also powered by Vaporesso. Let’s see how their first regulated squonk kit looks, feels and performs after two weeks of use.

Unfortunately, I received my least favorite color of the bunch, the rainbow edition. The RDA is rainbow all over, while the mod is part gray, part rainbow, and part featuring some geometrical design. On top of that, there is a TVL logo on the one side and a Revenant one on the other. There is just too much going on with the Delta mod, but some may appreciate the aesthetics – it’s not for me though. I also noticed that the three menu buttons have a bit of a rattle. It is noticeable and a bit annoying, but not a deal breaker.

The mod feels sturdy and well-built. It’s not very heavy, but heavier than most single battery squonkers due to its metal body. The battery door locks firmly into place, and opening it allows access to the squonk bottle. The screen is the standard colored OMNI 4.0 screen, bright and easy to read. It shows the same info as the Luxe mod I reviewed recently, but looks slightly brighter while being much smaller.

The RDA has a Recurve-like shape to it, lending it a bell-shaped look. It is a tall RDA and a heavy one too. Not a lot of extras are included in the box, but it does ship with three fused Clapton coils and a unicorn bottle that works with the mod’s bottom fill – but more on that later. 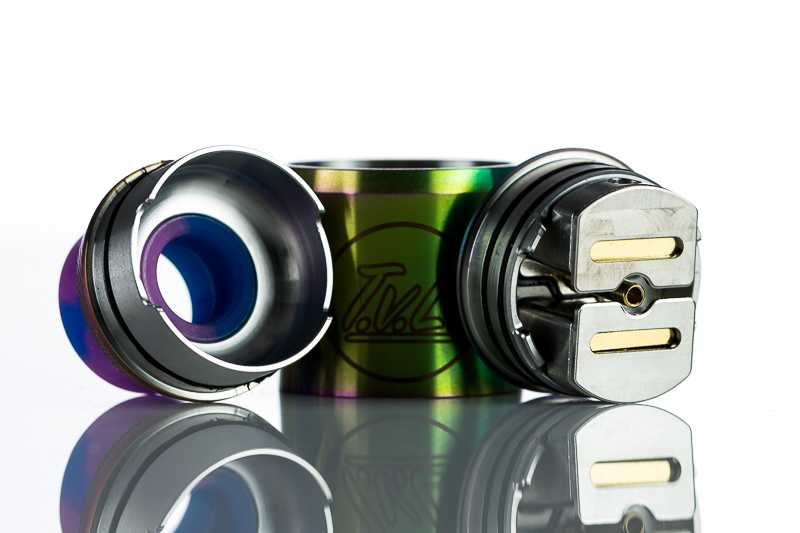 First, let’s address the elephant in the room: there is already a Reload RDA on the market. Not sure why they went with the Reload name, and I think they might need to reconsider. Looking past that, the RDA features two large blocks/building posts. Each block has one large slot, which makes it look like an ideal deck for mesh. Unfortunately, they didn’t include mesh, and the Wotofo mesh strips (the ones that come with the Profile RDA) are too small for the deck, so I only tested it with the included coils.

Building on the Reload RDA is not the easiest task in the world. You’ll need to wrap your coil with the leads facing opposite directions, and then bend them at the right spot to get them in the slots. I had to take a wrap out of the first two coils I tried on the Reload, due to having cut the leads too short. That’s the only issue with the build deck, as once the leads are in you only need to secure them using the flathead screws which are placed on the outer side of the blocks.

The deck features a raised squonk pin that feeds liquid right under the coil, with the extra liquid going either to the base of the RDA or back inside the bottle. Be sure to use some extra wick, as the wick slots go all the way down to the base. No issues with squonking, I really liked the design and the position of the squonk pin.

Airflow is made out of two fully adjustable slots and can be directed to hit the coils right in the middle – the top cap has a stopper but can be fine-tuned. O-ring tolerances and machining are very good across the board. Not the biggest fan of the large TVL logo on the top cap, but branding is more subtle on the atomizer than on the mod. 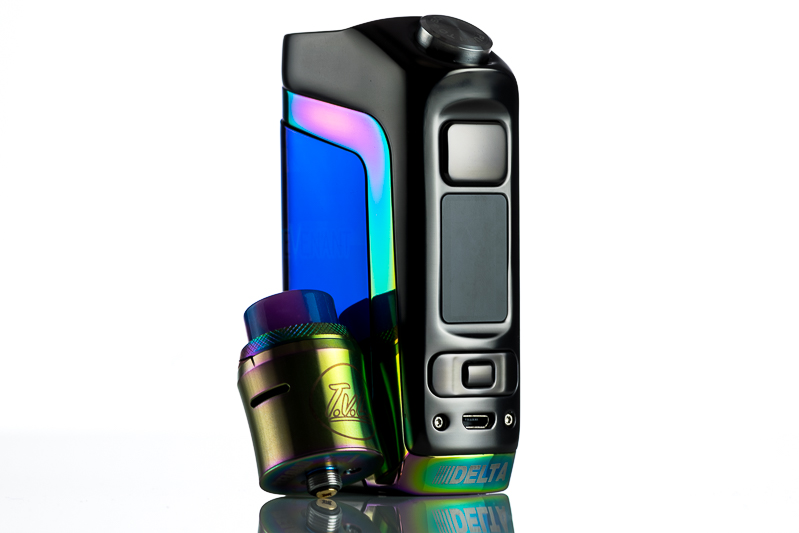 First things first, the Delta uses the OMNI 4.0 which is one of the best chipsets to ever come out of China. It is very reliable and hits incredibly fast. Unfortunately, the OMNI 4.0 here is not the fully capable edition: no temperature control, power curves or even bypass mode. It is set by default at the variable wattage – normal mode (VW-N). Not sure if they’ll update the chip in the future, but in its current state it’s only good for power mode vapers that don’t really care for power curves. Thankfully, that’s how I usually vape.

Super Player mode lets you fire down to 0.03 ohms; all the rest are pretty much self-explanatory.

Unfortunately, the mod will only fit atomizers up to 24 mm without overhang. I would have liked a bit of extra room on the 510 connection, but given that it is a single battery device, it should be fine.

The most interesting feature of this mod is its squonking system. A removable hard plastic bottle is housed in the chamber next to the battery. The bottle fits 6.5 mL of juice and doesn’t have to be removed to fill: a hole on the bottom of the bottle allows filling it by pressing the tip of any pointed e-liquid bottle. With the bottle full, e-liquid gets fed to the RDA by pushing a button that’s placed on the top of the mod (right above the firing button). That’s a very smart design, but let’s see how it performs. 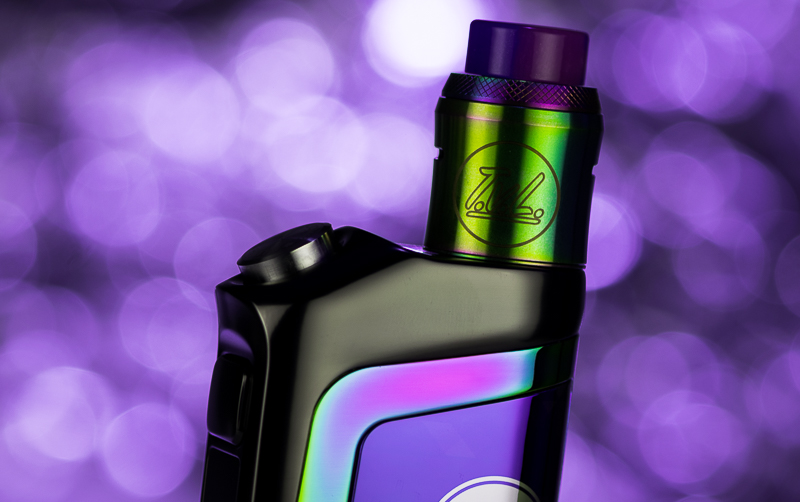 So how does the Delta and Reload kit perform? I tried the Reload with the included nichrome fused Claptons, twice with a wrap removed and once with the coil intact. The coils and the ample airflow of the RDA allow the wattage to be raised much higher than I expected. I fired the first two coils around 70 watts, and the last one around 85 watts. I loved the airflow of the Reload, it is smooth and maybe a bit too airy when fully open. I preferred it a tad more open than halfway. I noticed some whistling when playing with the airflow, but it goes away with minor adjustments. Overall, it’s not the most silent RDA but not one that I’d call noisy.

When I first looked at the deck, I thought that there is no way this atomizer will be able to produce good flavor; the distance between the airflow slots and the coil is huge. And I wasn’t completely wrong. It’s not as bad as I first thought, as the largest part of the deck is reduced by the large posts, but I can’t say that the Reload is even close to a flavor chasing RDA. Maybe building it with mesh would give a totally different experience, but not having some that fit and them not including a couple of strips, I can’t say.

They also claim that the RDAs internal structure catches spitback and recycles it, minimizing the loss of e-liquid. This is not something I can test, and didn’t see anything special on the top cap to support this claim, but I can say that spitback was kept to a minimum on the Reload. The structure also makes it leak resistant, especially once you get the hold of the squonking system.

The OMNI board performs as one would expect. Rapid firing, proper resistance readings, and certainly hits at or around the max wattage listed. The squonk button is a pleasure to use: no need to pump it, just keep it pressed and it will keep feeding the RDA with e-liquid. I tried the system on other RDAs and worked like a charm. The only issue? It won’t feed e-liquid when the bottle is getting low on juice (around 1 mL). If you are vaping on one e-juice throughout the day, that shouldn’t be a problem, as you can fill the bottle really fast through the bottom hole. But if you are like me, and vape on many e-juices throughout the day, emptying the bottle every time you want to refill might start bothering you at some point.

If you vape on TC or like fine-tuning your vape with curves and other settings, the Delta and Reload kit will not do the trick for you — at least until they decide to give the updates for the chipset. But for power mode vapers that like the design, it should work out to be a solid kit. The mod comes with some awesome and innovative features, and the push-to-fill system is one of the best ideas I’ve seen in vaping, even considering its flaws. Bottom filling is practical and 20700/21700/18650 compatibility is a huge plus.

The RDA is also innovative, but I would have liked a bit more flavor out of it and an easier deck to work with. The mod is certainly the star of the show here! The price of the kit is high in my opinion, especially compared to its competition, but maybe the innovation that comes with it makes it worth the price tag? Although I am a bit hesitant to recommend this kit since I’m not a huge fan of the looks, and it doesn’t yet have all of the features it should have, it still offers me plenty of upsides even without the updates to the chipset. Once the updates come, it should be even better.

What do you think of the Delta and Reload kit? Let me know in the comment section.